On January 17, 2017, the Fair Housing Justice Center (FHJC) and Congregation Beth Elohim (CBE) in Brooklyn hosted a special screening of the housing story of the EPIX-Original docu-series, America Divided. America Divided features stories about inequality in education, housing, healthcare, labor, criminal justice and the political system – all woven into an eight-story, five-part series. This premiere screening featured one of these stories – “A House Divided” –  in which TV legend Norman Lear, with the help of the FHJC, goes undercover in New York City to investigate housing discrimination.

Watch a clip of “A House Divided.” 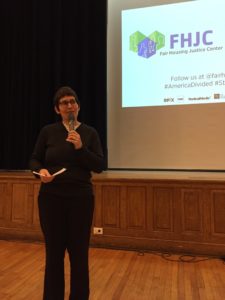 The event opened with words of welcome from CBE’s Senior Rabbi Rachel Timoner. This screening was part of a series of events hosted by the congregation to address the systemic racism which exists in New York City.

Following the screening, guests had the opportunity to hear from our esteemed panelists about the problems of housing discrimination and residential segregation in New York and how we might solve them. Our panelists included Fred Freiberg, Executive Director of the FHJC; Alexander Goldenberg, attorney-at-law with Cuti Hecker Wang, LLP; Abby Ellis, Producer of America Divided; Michael J. Goldberger, Chief of Civil Rights in the United States Attorney’s Office, EDNY; and an experienced FHJC fair housing tester. Benjamin Geballe, Vice President of the FHJC Board of Directors and member of Congregation Beth Elohim, moderated the hour long conversation.

“The divisions that are talked about in [America Divided] cut to the core of who we are,” said Michael Goldberger.

Abby Ellis reflected on the making of America Divided, “Once we dove into the bowl of ideas about inequality, it was a bottomless pit.” 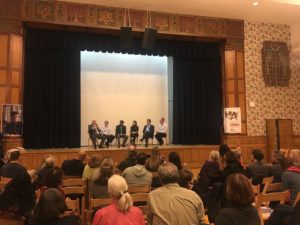 are being treated and they way you are treating others,” Alex Goldenberg offered. “And just recognize and appreciate how deeply ingrained and systemic these problems are.”

One of the topics the conversation focused on was the effectiveness of testing as an investigative tool to uncover discrimination, and the impact this work has on the testers themselves. “You do get an emotional reaction,” a seasoned fair housing tester explained while describing the experience of testing. “Because you realize that this issue of race is very real in America.”

“Our testers are amazing people. I can say that it has been the absolute honor of my life to work with people in this field who are so dedicated and so willing to go out there and put themselves in harm’s way,” Fred Freiberg remarked about the FHJC’s testing program, Acting for Justice. “We owe our testers such a debt of gratitude, because they are so often being mistreated in the housing market in very substantial ways.”

The event proved to be an evening of deep reflection and thoughtful conversation. If you are interested in learning more about how to continue the conversation or in hosting a screening of “A House Divided,” please email us at fhjc@fairhousingjustice.org.