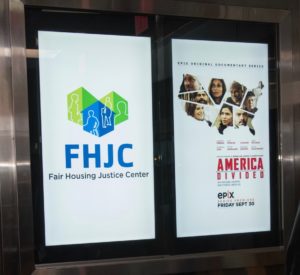 On October 5, 2016, hundreds gathered to support the Fair Housing Justice Center (FHJC) and watch a special excerpt of the EPIX Original docu-series, America Divided. America Divided features stories about inequality in education, housing, healthcare, labor, criminal justice and the political system – all woven into an eight-story, five-part series. This premiere screening featured one of these stories – “A House Divided” –  in which TV legend Norman Lear, with the help of the FHJC, goes undercover in New York City to investigate housing discrimination.

Watch a trailer of “A House Divided.”

Prior to the free screening, the Fair Housing Justice Center hosted a VIP reception to celebrate this groundbreaking series, which shines a much needed spotlight not only on the issue of housing discrimination in New York, but also on how the FHJC works to systemically end discrimination through testing and litigation. 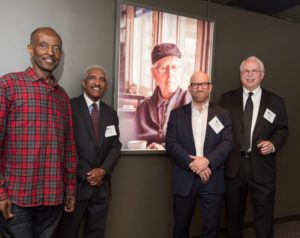 In his introduction of the “A House Divided,” Solly Granatstein, creator and executive producer of America Divided, stated, “The Fair Housing Justice Center is really doing God’s work.”

Following the screening, guests had the opportunity to hear from our esteemed panelists about the problem of housing segregation in New York and how we might solve it. Our panelists included Solly Granatstein; Nikole Hannah-Jones, investigative reporter 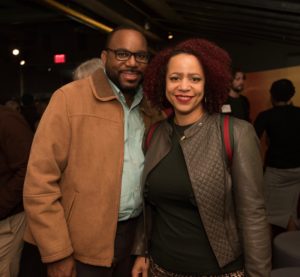 at the New York Times Magazine; Gene Capello, attorney-at-law and president of the board of the FHJC; and L.B. Williams, actor and seasoned fair housing tester. Our moderator was Amy Goodman, host and executive producer of Democracy Now!

“Change takes a long time to happen. But it has to start somewhere,” L.B. declared. 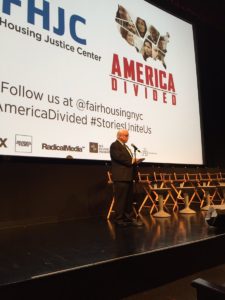 The event proved to be an evening of deep reflection and thoughtful conversation. Two days later, on October 7, 2016, the second episode of America Divided premiered on EPIX, and thousands of viewers watched Norman Lear explore and uncover housing discrimination. As more people have an opportunity to watch this series, the conversation on housing discrimination and how to address it will continue.

If you are interested in learning more about how to continue the conversation or in hosting a screening of “A House Divided,” please email us at fhjc@fairhousingjustice.org.

“This is America and it isn’t what we promised,” Norman Lear, America Divided.