The Fair Housing Justice Center (FHJC) is pleased to announce its newly elected slate of officers. President Anne Nacinovich, Vice President Rev. Dr.Yvette D. Wilson-Barnes, Treasurer Ramsey Chamie, and Secretary Michelle Sullivan-Brady were elected to two-year terms at the most recent meeting of the FHJC Board of Directors. 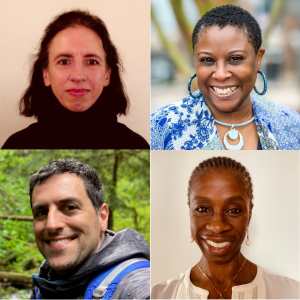 Ms. Nacinovich is an attorney at a non-proﬁt, representing poor Bronx residents in a wide range of civil matters. Her involvement with the FHJC stems partly from her own family’s experience with disability discrimination. She has been a member of the FHJC Board since 2019.

Rev. Dr. Wilson Barnes is Associate Dean of Student Affairs at CUNY School of Law, and has been deeply involved with the FHJC since it was created in 2004 as part of HELPUSA. She joined the Board in 2010 while serving as Associate Dean for Student Affairs at Union Theological Seminary. As an educator, administrator, and pastor, she approaches the issue of fair housing from both a legal and a faith-based perspective.

Attorney Ramsey Chamie will be continuing his service as Treasurer. He is a founding FHJC Board member and former employee of the Civil Rights Division of the U.S. Justice Department. His interest in fair housing began during college while studying segregation, white ﬂight, suburbanization, and the civil rights movement of the 20th century.

A senior advertising executive, Ms. Sullivan-Brady has been a Board member since 2013. Her association with the FHJC began when she and her husband contacted the organization after facing suspected racial discrimination in Brooklyn. The FHJC conducted a testing investigation confirming the discrimination, and joined the couple in a lawsuit that led to a settlement. Their story was featured in the award-winning FHJC documentary A Matter of Place.

“I am honored to continue working with the exceptional FHJC staff and my colleagues on the board in this new role,” said Ms. Nacinovich. “Yvette, Ramsey, Michelle and I share a commitment to the FHJC’s mission of fighting housing discrimination, and we are excited to work together towards that goal.”

FHJC Executive Director Elizabeth Grossman paid tribute to the outgoing officers including Bernhard Blythe, who is stepping down after more than three years as Board President, along with Vice President Lisa Darden and Secretary Michele Aronowitz. “Their work as Executive Committee members has been invaluable during my transition as a new Executive Director, and I’m very pleased that they will all be continuing on as Board members.” She added, “I’m looking forward to working closely with our new officers and the entire Board as the FHJC continues our mission to make fair housing a living reality for all.”